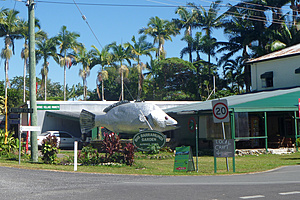 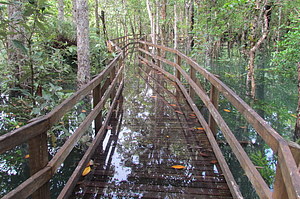 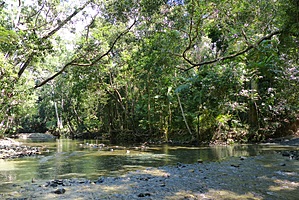 Whew, after a long unseasonally hot and humid spell which almost sent us all 'troppo' the weather has changed to much cooler nights (down to 19C last night) and pleasant days around 30C.  Occasional showers have left our beautiful Daintree looking stunningly vibrant and lush.... read more...

Here in beautiful Far North Queensland we are all breathing huge sighs of relief that Cyclone Debbie passed us by - our hearts go out to all who have lost so much in central and southern Queensland.  Nothing but blue skies, hot days, not a drop of rain and hardly a breath of a... read more...

Although we have not had a 'real' wet season this year the weather now is just about perfect with warm days, the nights just a little cooler and just enough rain that we don't need to run the sprinklers any more.  A wonderful time to visit before the main visitor-season in a... read more...

We were enthralled last night watching the first of three documentaries by this wonderful man.  And feel so lucky that we have such a world icon right on our doorstep!  http://www.cbc.ca/documentaries/great-barrier-reef   read more...

It was so pleasant just now to go for a walk around our trails without almost collapsing from the awful heat and humidity of the past few months - such strange weather with virtually no wet season, less than a third of our normal rainfall.  The first time since 2005 that we've... read more...